Have you seen these cute stuffed animal Turkeys at Target and other stores? My 8 year old just had to have one, named it Tom Turkey and it has been all over this house lately! I decided we had to come up with some fun Thanksgiving games to play with Tom Turkey to put it to good use! So, if you have a stuffed animal Turkey, feel free to check our ideas (and add your own if you have any!). Either way, hope your Thanksgiving is filled with lots of family fun!

This post contains affiliate links which give me a small percentage of any purchases made at no cost increase to you. You can see my full policy here. 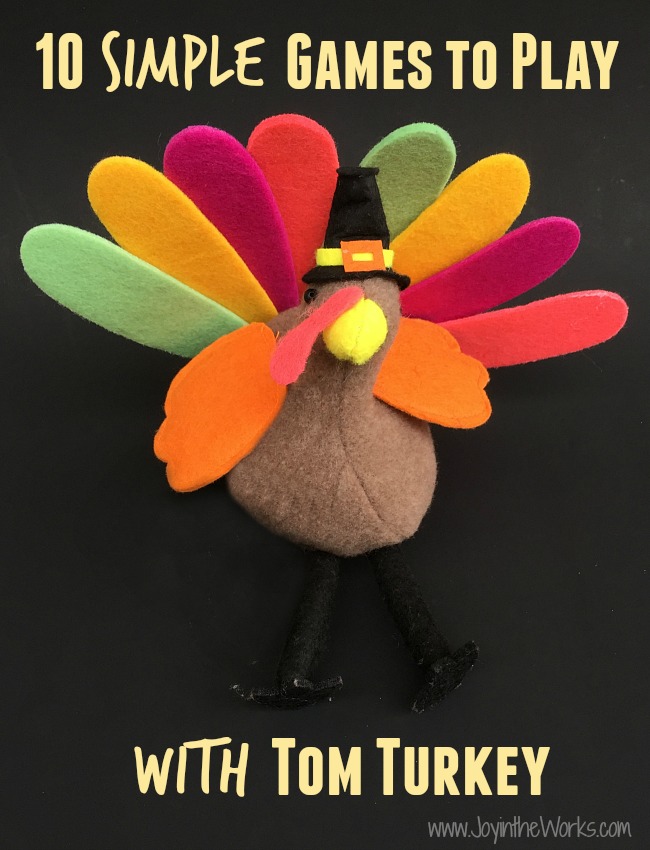 You only need a few supplies (if any!) for these games- the most important being a stuffed animal turkey! We got ours at Target for like $5 or something, but I found a few others on Amazon that are so cute too! 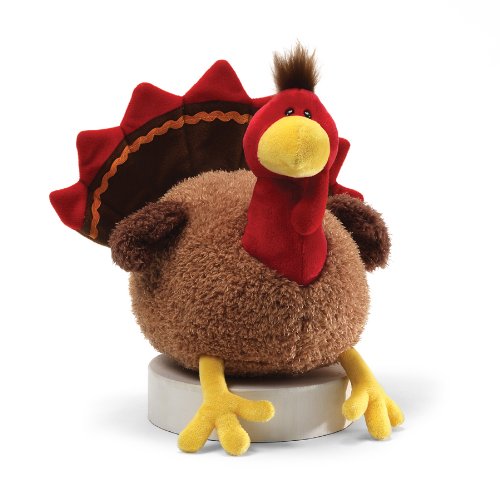 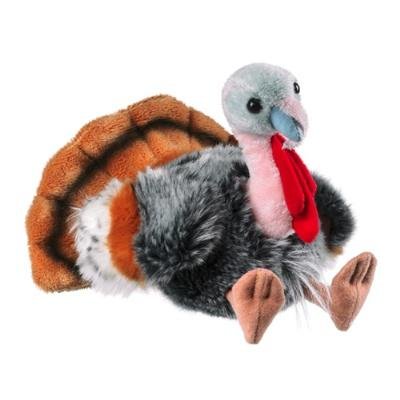 This is a simple game, but a classic and can be played inside or out depending on the weather and energy level. Simply hide Tom Turkey and let the kids find him! Even better, add clues or just use hot and cold tips! 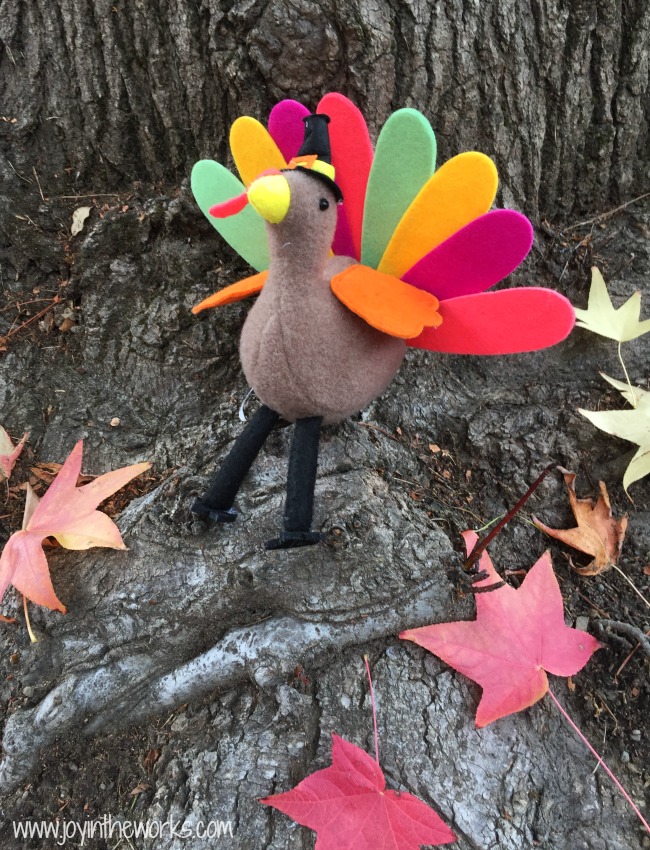 Remember when we tried to practice good posture while balancing a book on our heads? Same concept, except you have to balance a stuffed animal turkey on your head! Add an extra level of challenge by walking or racing others or make it a relay race! You could also balance him on a long wooden spoon for another version. 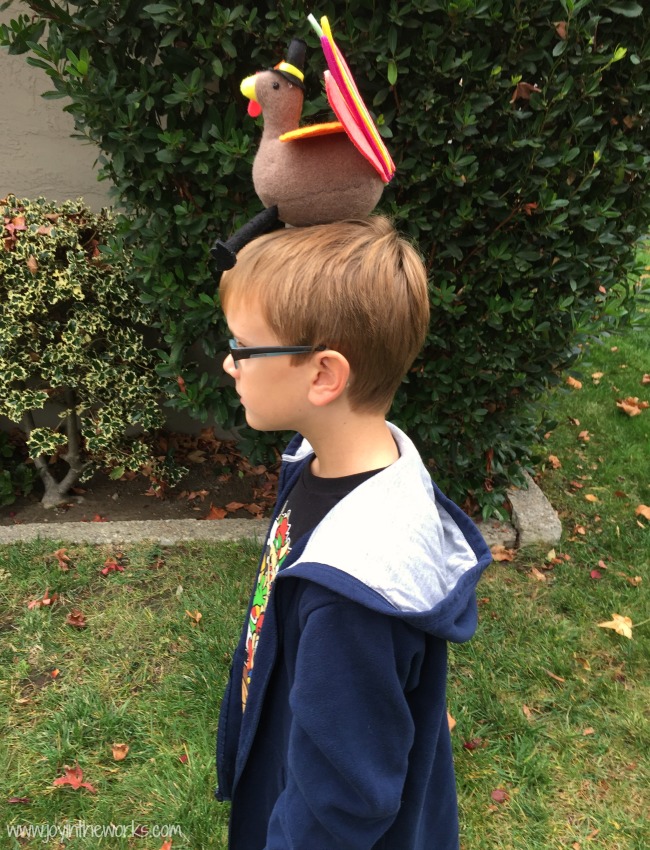 Who doesn’t love the game Hot Potato?! Have the kids sit in a circle, knee to knee. Turn on some fun music (I am not sure Thanksgiving music exists, but if so, feel free to add it! ;). Have the kids pass Tom Turkey around as if he is “hot” to the touch and they don’t want to hold him (or get stuck with him) too long! Next, stop the music at random times and whoever gets stuck with him is out. Truth be told, I often skip that part. Or I let the person who is out be in charge of the music so no one feels bad. But depending on the age, some kids don’t mind at all!

Simon Says is a simple direction following game. But you can change it to a Thanksgiving version of Simon Says by calling it “Turkey Says”. The person who is the “Turkey” giving the directions has to be holding (or balancing on his head?) Tom Turkey!

Okay, this is something we have done with actual Angry Bird toys. I posted it to Instagram, but maybe someday I will write a post about it! Either way, the game involves stacking cardboard boxes (shoe boxes are great) or cardboard bricks if you have them in different structures. The goal is to launch the bird in a way that will knock down the structure. If you have a water balloon launcher, even better, but my kids just enjoyed trying to throw it hard enough to knock down their bricks.

You can play this as a regular game of tag or freeze tag. Just have the person who is “it” run around with trying to tag the others with the stuffed turkey (foot or feathers would work great!)

This game could be played a variety of different ways. My oldest would probably just like to “toss” the stuffed animal turkey at people. However, in a gentler version, we played Turkey Toss where you had to toss the turkey back and forth without dropping him. Each toss involves stepping farther away from your partner. You would need multiple turkeys for this one if you have lots of people. A more dangerous version of this game would involve foregoing the stuffed bird and giving the players “turkey” eggs and see how long they can go before those break!!

Do you remember playing 4 corners in school as a kid? We love that game still and just turned it into a Thanksgiving game! You start by labeling 4 corners of a room with numbers. We just taped up simple pieces of paper with numbers on it. Next, have the kids close their eyes and hide Tom Turkey in one of the corners. Then the kids get to open their eyes and run to a corner. When everyone is set in their corners, you get to reveal where Tom Turkey is! All kids in that corner are out.

A spin off of the What’s Missing game- find several objects from around the house, including Tom Turkey. Let the kids see all the items and commit them to memory. Put them all on a tray under a towel or blanket. Take one item away when no one is looking (sliding it under the towel and behind your back works best). Have the kids guess what’s missing. Then let the kids take turns taking away an item for each other (they love that part!)

In case you have never played Duck, Duck, Goose before, the children sit in a circle. One person is “it” who walks around the circle tapping the players gently on the head (with a stuffed turkey in this case). With each tap, the child says “Duck”. When they get to the player they want to chase them, they tap them and say “Goose” (or “Turkey” for this game). That person runs around the circle trying to tag the original player (or stuffed animal holder) until they get back to their spot. Whoever gets to the empty spot first gets to stay there. The person who didn’t make it, gets to be “it” and walk around the circle tapping other people. Their is something about a “Mush Pot” if the original tapper gets tagged before they make it to the other person’s spot (which could be also the pot of gravy or boiling water if you really wanted to continue the theme!), but we often skip that part if we have little ones playing.

This is definitely an outside game or a place with lots of running room! One person stands at the end of a room or lawn holding Tom Turkey. They call out “Green Light” when they want the other players to start walking toward them (maybe waddling or gobbling like a Turkey?). When the players start to get a little close, the Turkey Holder calls out “Red Light” to get them to stop. They continue this pattern until one person reaches them/Tom Turkey and tags the stuffed animal. The winner now gets to hold the turkey and gets to call out the colors. Everyone else goes back to the beginning and starts all over again.

Okay, the kids were getting desperate here clearly! But if you have a slide around, you can always slide him down the slide and see how far he goes! 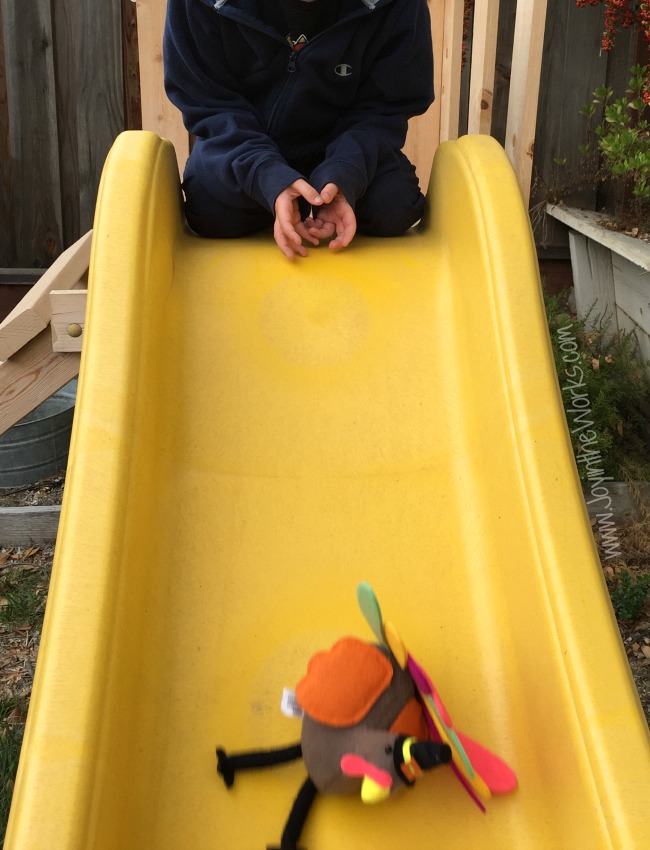 I think I could go on and on with other crazy versions of classic games, but when I have to use Turkey Slide, I am clearly out of decent ideas! ;) What about you? Any to add? 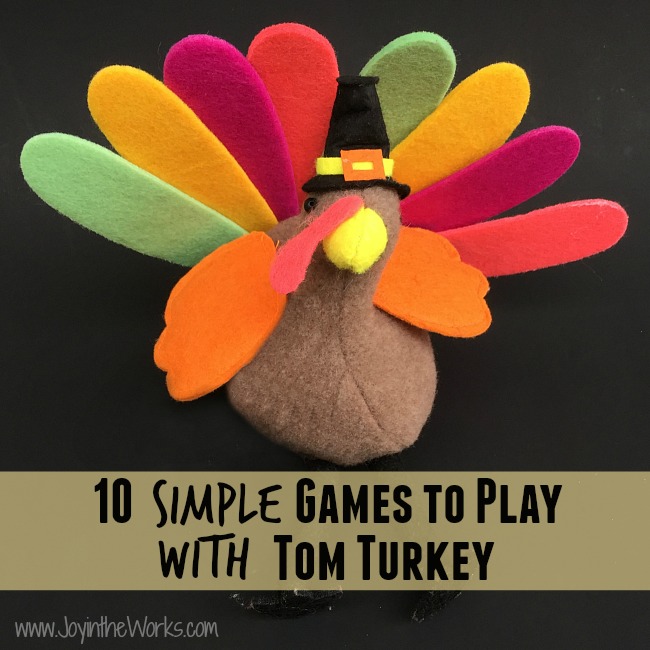 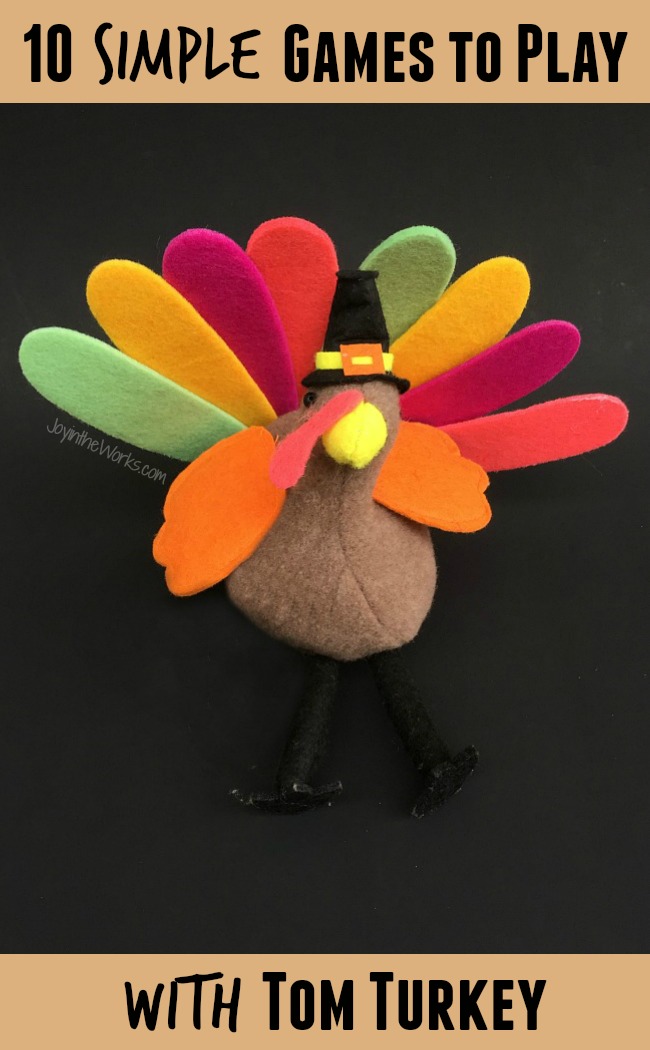 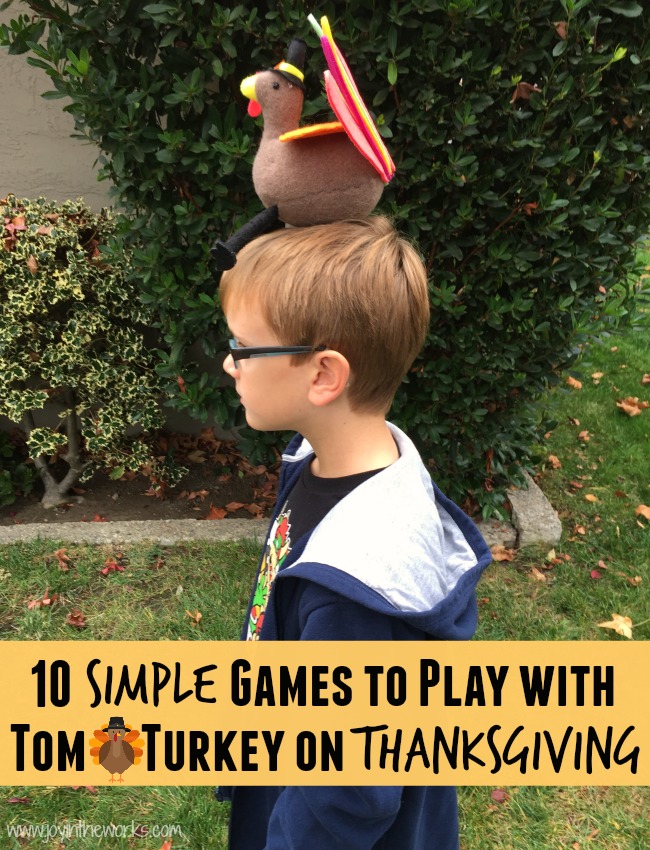